What is Amazon Advertising? 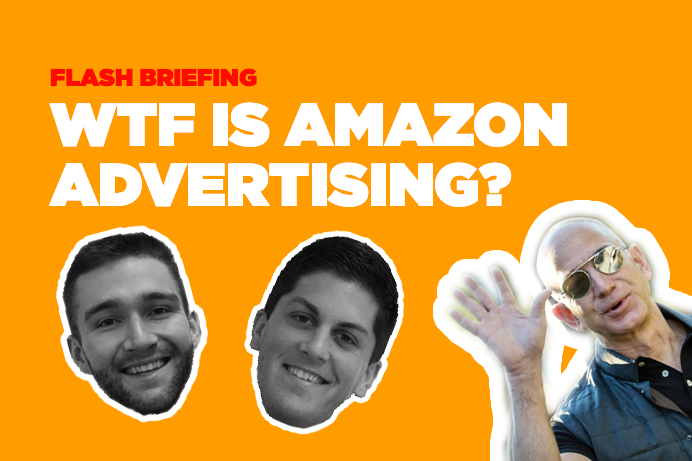 A transcript from the recording is included below:

Egan: Thank you for tuning into our flash briefing. My name is Egan Montgomery. I'm the director of marketing here at DemandJump. I have with me Cameron McAllister who is a strategic marketing advisor here. Today we're gonna be talking about Amazon ads, what it is, what's it all about. We've been hearing a lot of our customers and people in the industry starting to ask questions about Amazon Ads and seeing some success on the platform specifically with advertising. Cameron's kind of our in house expert in this area. Cameron, thanks for joining us. Can you just quickly give us a little background on what you do and how you help our customers.

Cameron: Yeah. Sure. As you said, I'm a strategic marketing advisor here at DemandJump. What that means is I am basically the smiling face that all of our customers see and get the pleasure of interacting with when using our platform. I'm in there working alongside them, forming strategies, often even executing on marketing campaigns on their behalf and really just kinda there on the front lines to help out and provide value wherever we can.

Egan: Perfect. Thank you, Cameron. Before we jump into the real content, I just ... I have always thought this was really funny. You can see the Amazon logo kind of on the right side of this slide. I grayed out everything except that orange smirk. I feel like that's just so perfect for what they do because anytime Amazon enters anything, whether it's cloud hosting or eCommerce or their own branded product lines, or now advertising, they always make a big splash and displace traditional players in all this stuff. I just think it's so perfect to kinda the whole persona they've taken on in an industry. Okay, but without further ado, we will jump in. Cameron, I know you brought this to my attention a couple months ago probably and we've been meaning to chat about it at a high level at least, so just give us a little bit of the background on what is Amazon advertising. What does this move mean?

Cameron: Yeah. Amazon, more so recently than ever, has been making a big push into the digital ad space. I believe the latest I saw was they've actually doubled their ad revenue in the past year, up over 100% on their diversifying very quickly and improving the amount of offerings that they have out there to their sellers and vendors and agencies. Basically, it's a suite of ads spanning display, video, shopping ads, both on and off of Amazon owned properties that are meant to drive sales and drive revenue for the products that you can buy on Amazon.

Egan: Okay. I know one thing we've talked about is there's Amazon in ... ad inventory on the platform. They also have a DSP, right? Can you talk about that a little bit?

Cameron: Yeah. That's one of the big moves they've made recently is, I think they got their DSP into a place where it's seeing significant growth and they've consolidated alongside their own platform ad options. Sellers and advertisers and agencies on Amazon now have the ability to target various placements across the web and not limit the locations where their ads can show to just Amazon.com. You'll start to see, if you haven't already, all sorts of different display ad formats and video ad formats as you're out doing whatever it is you do on the internet.

Egan: We've definitely seen with some of our customers and brands in general a lot of success on the Amazon platform and with Amazon ads I think, just extremely high return on ad spend, lots of revenue. What's the significance of that?

Cameron: Yeah. I think it's causing a lot of headaches for product manufacturers and product marketers who are active on Amazon. It's great that they're seeing high returns and they're getting a lot of sales volume on Amazon, but now they're being faced with tough decisions when looking at Amazon, not only as an additional distribution channel, but we're getting questions like, "Hey, is this cannibalizing my onsite activity? My margins are higher on my own website. My profit is better, so I don't know if I should continue investing in Amazon. Should I cut back?" They're trying to strike that balance and it's proving to be very difficult.

Egan: I like that, strike the balance. What are some variables or just anything that you're looking for to help you and the brand maintain that balance?

Cameron: I think as long as we see growth on both sides, typically we're pretty happy. Ideally, if you're a marketing and you roll out Amazon ads or you roll out a new product line on Amazon that's also available elsewhere, as long as you don't immediately see a drop off wherever it existed previously or wherever you were playing previously, there's probably not an immediate cause for concern because the reality is, with the growing and loyal user base that Amazon has, a lot of online shoppers are starting their shopping journey on Amazon rather than turning to Google first. You're almost ... Rather than feeling like you're cannibalizing things, I would urge people not to have that knee jerk reaction and just to think of it as almost a prospecting channel.

Egan: That's interesting. I know when we talked before this started about your brand website and your own branded content versus Amazon, why do you think it's still so important to have your own branded site and still put a lot of time and energy into that?

Cameron: Yeah. I think the biggest caution that I have when our customers come to us and they ask these types of questions is don't invest too heavily in Amazon to the point where you're forgetting about how you established yourself in the first place. It's important to remember that, when you're advertising on Amazon, you're always going to be competing with other products right there alongside yours. Whereas if you are investing in your brand and driving users to your website first, that's where you can really control the experience and control the messaging, as opposed to, again, someone finding you on Amazon next to a competitor's product because what they don't show you is how often are you actually losing that click to whatever that product is that's next to yours.

Egan: Right. Okay. Okay. We're hearing about this more and more. Is that fair to say?

Cameron: Definitely. Yeah. It's coming up all the time, especially with, again, product manufacturers, I would say, CPG kind of space. People that traditionally have viewed Amazon like a distribution channel are now viewing it as an advertising channel as well.

Cameron: It's coming up more and more frequently.

Cameron: I did some research before this. Fun fact, there are over 100 million Prime members today. To put that into perspective, that is more than the population of the UK and Canada combined, almost as large as the country of Mexico in its entirety. It's a huge group of people. Amazon won't disclose what those growth rates look like, but it seems like they're going at least in double digits every single year, adding 10 to 20 million users a year. Again, those Prime members are the ones that are starting their shopping experience, more than likely, on Amazon because they're starting out from a point where they know they have free shipping. They know they have two-day shipping. They're not even giving other eCommerce sites a chance. Definitely continue, or expect to see continued growth. It's just kind of unknown if or when it will plateau.

Egan: Very interesting. Okay. We've talked a little bit about the cross channel impact, I would say, of Amazon ads. Do you notice ... It's okay if not, but do you notice branded search results going up within ... in correlation with Amazon ad campaigns, or do you see on site eCommerce sales increasing based on Amazon advertising or does most of that revenue come on the Amazon platform?

Cameron: Yeah. That's a great question. We actually noticed it via the inverse. We've looked into that exact topic. At first what we saw, to take a step back, is with a few customers of ours, going along with what we're used to, we're investing all of these dollars and driving traffic to their website, hoping that they were going to convert, but conversion rate was maybe declining and at the same time, conversion rate on Amazon was going through the roof. We're looking at this, scratching our heads, thinking, "Hey, there's gotta be a correlation here." We've definitely seen investments off of Amazon drive on Amazon branded searches, if that makes sense.

Cameron: If we're pushing, say, Nike shoes on Google, we see Nike climbing up the ranks in terms of the most popular searches on Amazon as a result of our other advertising efforts. After proofing that out, we did take a look at the inverse, too. As a matter of fact, it goes both ways. I think going back to what I just mentioned about some shoppers starting their exploration on Google, some shoppers starting out directly on Amazon, they might as well have Amazon as their home page, the sooner you can hit them, regardless of where they're starting that path to purchase, it's translating to other channels and definitely moving the needle in those places.

Egan: Yeah. One thing we talk about a lot at DemandJump is purchase intent or someone is in buy mode and I think the general consensus is that Google page search or even organic search is about as high of intent as you can get on the advertising realm because someone's searching for something and the ad is right there. Does Amazon, as a growing search engine ... There's lots of data that suggests that a lot more internet searchers are actually starting on Amazon. Do they have the potential to sort of step in front some of that Google ad words traffic, or any other page search ad? Because it's almost a level even deeper of intent because you're actually on the shopping platform.

Cameron: Totally. Yeah. Totally agree. I think you ... The way you just said it is exactly right. There is an added layer of intent there, certainly because if I'm searching for shoes or tshirts on Google, I could be just doing research for some wild reason about shoes or shirts. I don't know. I could be looking for anything, but if you're starting on an eCommerce site like Amazon, you can be a little bit more certain that that person has intent to buy whatever it is that they're looking for just by nature of results that they're going to receive.

Egan: Yep. Very cool. Well, we are coming up on time, but Cameron, thank you so much for your insight and for chatting with us today. If you have any questions about Amazon ads, feel free to reach out to us through any of the contact forms on our website. You can shoot me an email directly. Egan, E-G-A-N, @DemandJump.com, or you could email Cameron. What's your address?

Egan: Perfect, and we'd be happy to answer any other questions that you might have about this. Otherwise, look out for more of these soon. I'm sure we'll have Cameron on here a fair amount. Thanks everyone for tuning in.