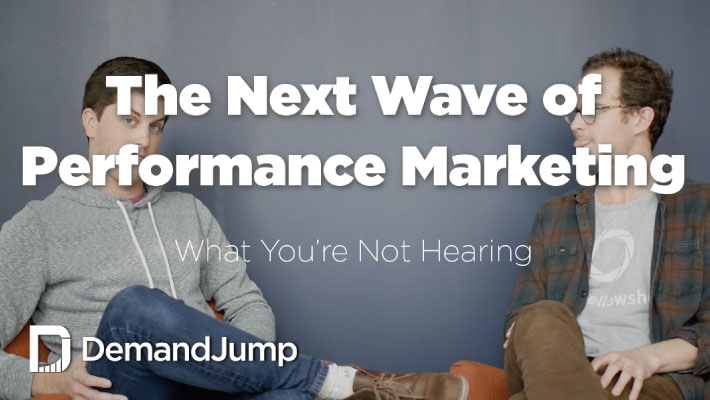 In this video, you'll hear 8 pieces of performance marketing wisdom your dad forgot to tell you about - unless your dad is Shawn Schwegman (DemandJump's Co-Founder and Chief Strategy Officer). Transcription provided below.

Asking yourself, "what is performance marketing?"
Here's a 101 course.

The obvious truth is that consumers interact with brands across a variety of channels before deciding to buy anything. Marketing actions on one channel inevitably impact consumer behavior on others.

But, digital marketing grew up in silos. Maybe you’re running social campaigns directly through Facebook ads or on Instagram, but you’re running display ads somewhere else. These separate systems report in their own platforms. So, it can be very hard to combine insights across channels to understand how social campaigns affect what you're doing on search and vice versa.

Nine times out of 10, when you are running a campaign, let's say on Facebook for example, you're going to make some sort of impact on your audience’s behavior. You're going to influence how the users you're targeting are then going to interact with you in a channel like paid search. So depending on the message that you're putting forward, that very well may influence what that user does next in a different place. Are they then going to go look for your brand on Google? Are they doing research on Amazon? How can you use one channel's findings to influence what you do next somewhere else? If you can’t look at these channels’ search data in direct conjunction with your campaign data, it becomes difficult to pick up on any meaningful cross-channel trends.

Marketers like to categorize entire channels as being either top or bottom funnel and it drives us nuts, if I'm being perfectly honest. We at DemandJump believe that you could create a full funnel strategy within just about every single digital channel by itself. People love to think display is a solely top-funnel-channel. If you take a more strategic approach to display, and take the time to understand what’s triggering consumer action, you can move consumers down the funnel in just one channel.

This ties back to what we were saying about breaking down channel silos as well. If you're just looking at things like impressions and view-ability of your display ads, how are you then quantifying whether or not a message is resonating? Even if someone doesn't click, you can still look at search data to know maybe your search data that suggest, hey, this message actually influenced how people are searching for us and are finding us elsewhere.

You can take these search findings to inform what you do next in your display campaigns. With refined messaging, you can bring consumers to click on you display ads further down the funnel.

You can even use traditionally bottom-funnel platforms as top-of-funnel advertising tools. We've run display campaigns on Amazon, promoting a product but treating it as a prospecting channel (despite Amazon being a pretty low funnel normally type platform). And after doing so, we actually started seeing searches popping up in our Google search term data for people searching for that brand Amazon. So consumers were searching for the brand we were promoting on Amazon in Google, for that product on Amazon, then finding our website. So cross channel behavior goes in all directions. It’s crazy.

What I mean by that is when people hear performance marketing, nine times out of 10 they think, okay, so these are marketing channels that are going to drive an immediate ROI and the only KPI they care about is revenue, ROAS, or conversions of some kind. But I would recommend not necessarily treating every single performance marketing initiative as an immediate revenue driver - and also not discount initiatives that don't necessarily drive immediate revenue. So really take a step back and view your efforts holistically and in a way that allows for more intelligent goal setting, if that makes sense.

It’s natural to separate out your branded terms from your unbranded terms. People that are already searching for your name, you know they’re interested. So these campaigns are going to have a higher immediate ROI. While unbranded terms might not drive immediate performance, they’re still important to hold a search marketing presence on. Don’t mistake this high performance from branded terms as a reason to reallocate all your resources away from unbranded campaigns. You need to continuously feed the funnel. Without drawing consumers in with top-of-funnel messaging in paid search, your well of demand might run dry.

This sounds like an obvious one. But in digital marketing, it’s easy to mistake good digital marketing metrics for indicators of true business growth. Take click-through rate for example. Just because you have a high CTR doesn't mean much unless you're tracking beyond that point to ensure  that clicks turn into revenue.

But this exists for all metrics. You could even argue that an alright ROAS could potentially be discounted if you're bringing in customers that are only one time buyers. I think it's almost an endless cycle. You know, if you care about the lifetime value of a customer. You could always be moving further into the future when evaluating the performance of certain campaigns or initiatives, just to make sure that your long-term value is top of mind.

We know, virtually across every industry, that people don't buy after just one well placed ad. Right? They're interacting with your brand over the course of several days or even weeks before making a decision on whatever it is that you're trying to sell them. By moving your reporting into an independent place, you can really start to see the holistic journey of that buyer and every single touch point that led them to purchase.

Most channels would like to take credit for any conversion that occurs. For example, if you're just looking in Google ads, they're only going to show you the search ads at that user clicked on before buying. And Facebook's only going to show you the Facebook campaigns with that user interacted with before buying, but you have no way of knowing if that's the same user and they actually interacted with both of those campaigns before buying or both of those channels.

You'll see a lot of systems are adopting algorithmic attribution and tools that try to piece those two worlds together or to provide a more holistic view of what's going on. But it's very rare, at least in my experience, to find granular enough data to really understand what are the steps at the aggregate level that my users take before they buy so I can start to identify patterns of different campaigns that are working well together.

Another thing that I think is extremely important to keep in mind is experimentation. We have kind of a mantra here that if you're not testing something in any given channel or in any given campaign, then you're doing it wrong.

You can't just evaluate an A/B test based on the ROI of a given campaign. The variable you’re experimenting with has to be closely related to the metric attached to that area of the experiment.

Your experiments can also run their course through a matter of weeks. If you are cookie-ing the users that visit each of your landing pages, you can use this information to test if they’re revisiting the site to understand how well a certain landing page’s contents influenced purchase behavior. Even if they don't convert on that first visit, are they then converting 30, 60 days from now? I don't think the test has to end after a 14 day window or whatever you construct right out of the gate. But I think it does need to cater to whatever that variable is, both again, your short-term and long-term goals that you're hoping to achieve.

Align Incentives With Your Partners

When I say that, I mean not only external partners but internal as well - internal stakeholders. So I'll explain what I mean by that. We see a lot of marketing teams fighting for budget on a quarterly or yearly basis. You know, they want to do as much as possible. They want bigger budgets to spend more on media and to do more marketing. But they are sometimes restricted by very rigid spend limits, whether that's on a monthly, quarterly, yearly basis, whatever it might be.

What we're starting to see a little bit more of is kind of variable budgets, so they're able to align incentives based on their marketing performance. The marketing teams then say to leadership, “Hey look, if we hit these goals that we're aligned on, will you give me more budget?” And it's kind of turning marketing into a more of a revenue-center than a cost-center, as it might traditionally be viewed.

But this takes place externally more often. The most common thing we see is media execution partners are often incentivized to do the work that they need to do in the shortest amount of time possible to get your campaigns out the door, and then provide whatever reporting back necessary. But they're getting paid, more than likely, a flat rate based on whatever media they're putting into the market. That doesn't necessarily align with what you, as the marketer, are wanting to achieve. Your goal here is to increase revenue or to fill your funnel via user acquisition in your email subscriber list or something like that. How can you align incentives with whoever it is that's actually placing media for you or executing on your campaigns so that you're both incentivize to succeed at those goals that are agreed upon?

There are some pretty big and bad examples of this out there. I mean, we talk about it a lot with the Chase example. Chase decided to put their digital advertising a little closer to the vest, for brand safety reasons, and cut the number of websites they were running display ads from 400,000 to 5,000 and saw no change in performance. I can't speak to what their agencies incentives were, but if Chase’s agency was being paid for the hundreds of thousand of impressions they previously generated, there was a serious misalignment of partner incentives there.

For that example, it could even be extended to the publishers as well. You're out there targeting thousands of websites, hundreds of thousands even, programmatically with display ads. Those publishers don't care if the users are on their website ever buy from you. They just want to get paid for the impression. That's another huge shift that we're seeing. A lot more marketers are tending to go more and more of the premium direct route - where they can work out custom deals with the publisher. Here they pay for performance and align incentives with publishers, saying, “If I'm successful as a marketer and you're a publisher placing my ads and driving valuable users to me, we both make money.” There's some sort of variable incentive there. So it's just kind of another extension of the same performance mindset.

Final advice? Figure it out. Digital marketing is difficult, but with the right mindset, tools, and partners, it doesn’t have to be.

DemandJump’s platform empowers marketers to get the whole story when it comes to understanding the health of their marketing efforts. With DemandJump, you see what you're customers are doing, what your competitors are doing, and what you should be doing next all in one place. This enables you to deeply understand cross channel marketing performance, discover hidden gaps and opportunities, and act on powerful recommendations to optimize digital marketing spend.


Get a Demo of Marketing Attribution