Marketing Attribution Defined & The Power of The Algorithm 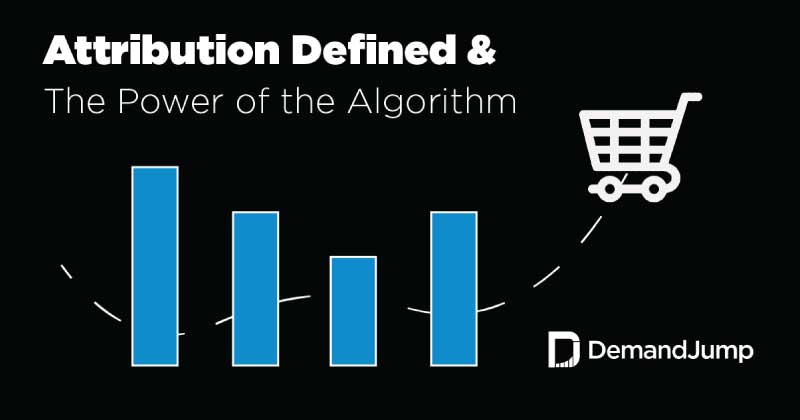 However, which marketing touch gets what dollar amount depends on the attribution model you consult, which is why we address how these attribution models work and how you may use them here. These models may include:

How Attribution is Used in Marketing

If one of your attribution models shows that a specific channel adds tremendous value to your campaigns, or influences more sales, you might re-invest in these efforts to improve your ROAS.

But how you draw insights from your various attribution models matters, and it’s easy to be led astray by misinterpreting these reports and not diving into what specific action drove what performance.

Single-touch attribution models are often seen as archaic as they fail to consider or give credit to the various other marketing touches likely to have played a part in convincing someone to buy from you. Although they don’t offer a holistic view of conversion influence, they are still often used to understand the buyer journey, which we will address in the sections below.

First-touch attribution gives all the credit to the first marketing channel a consumer engaged with and gives no credit to any other touchpoint along the path to purchase.

If you’re trying to optimize for the top of your marketing funnel, you’d consult first-click attribution to understand which channel was most effective at getting new audiences to engage with your brand. 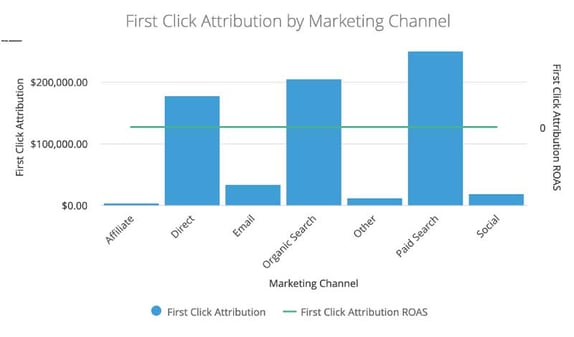 With this DemandJump customer, you’ll see that Paid Search is often the first marketing touch that brings consumers to their site. But without diving deeper into what campaign drove this performance, there’s little insight to be gained. Was it an unbranded campaign? If so, which campaign was it? And why? To really make sense of your marketing efforts, you’ll want to make sure your attribution platform allows this kind of deep dive to always uncover what’s working & what’s not.

Last-touch attribution assigns all credit to the last ad or marketing touch that directly caused an individual to convert. It assigns no credit to the channels a consumer may have interacted with before that ad where they decided to buy from you (even if they were really influenced by a display ad or Facebook post they saw earlier).

If you’re trying to optimize for the bottom of your marketing funnel, you’d consult last-click attribution to understand which channel was most effective at getting your audiences to actually buy from you. 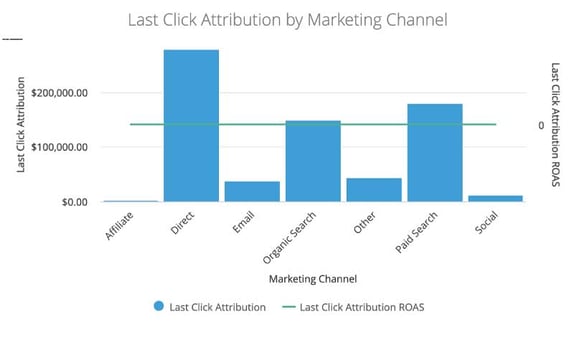 With this DemandJump customer, you’ll see that the most influential channel to do this is direct website traffic.

But this makes sense, doesn’t it? If people have already been convinced they need to buy from you, they’ll come directly to your site to buy. So as a marketer, you’ll likely want to know which marketing effort was it that really did the selling? Because of this curiosity, marketers will often consult last non-direct click attribution.

Last non-direct click attribution ignores direct traffic and attributes all of the conversion value to the channel a consumer interacted with before coming directly to your site. This is useful for marketers who consider visitors who come directly to their site “ready to buy” and having already been won over.

If you’re trying to optimize for the bottom of your marketing funnel, but are skeptical of giving all the credit to direct traffic, you’d consult last non-direct click attribution to understand which channel was most effective at getting people to buy from you.

With this DemandJump customer, you’ll see that it was often-times the channel of paid search that did the selling.

As mentioned above, while they can help to point your marketing strategy in the right direction, single-touch attribution models offer a relatively clunky form of quantification. If the most influential touchpoint actually happened outside of the first, last, or second-to-last touch, these attribution models won’t pick up on this influential channel’s ability to generate new business.

Because multi-touch attribution assigns value to a variety of marketing touches made along the path to purchase, it gets closer to holistically assessing your marketing efforts. But rule-based attribution is still rudimentary compared to algorithmic attribution models (link to problems section).

Time decay attribution assigns more credit to the marketing touch points occurring closer to the sale. This attribution model helps marketers optimize marketing touches considered to be “deal-closers”. These are often the performance marketing channels where consumers go when they have intentions to buy anyway.

The risk associated with attribution models that favor bottom funnel marketing activities, however, is that they over-emphasize the importance of converting-activities without emphasizing the importance of “feeding your funnel” or reaching new audiences who haven’t heard of you yet.

Position-based attribution gives more credit (40%) to the first and last touches along the path to purchase while offering only 20% of the credit to the interactions in the middle. This model attempts to surface both first and last marketing touches on the customer journey, and could help you optimize for the beginning and end of the customer journey (the channels that bring in new audiences, and the ones that convert them into customers).

Because it is still rule-based (meaning it simply assigns a percent of revenue to marketing touches depending on the order in which they occurred), even multi-touch attribution is limited. Without taking the step into algorithmic attribution, multi-touch fails to quantifiably tell marketers what they should do next, or tell marketers what action of theirs truly influenced conversions.

Marketers are still left wondering, “What was the content which may not have triggered immediate conversion, but kept visitors coming back for more?”

Say you have a killer piece of organic content that secretly influences a ton of new business. I say secretly because, in this hypothetical case, people who convert come in through this channel just as frequently as through paid search. But they came in through paid search because of their exposure to the organically ranked content. So rule-based attribution models undervalue this organic piece.

But algorithmic attribution could tell you this because it's built off of analyzing probabilities, not just dividing revenue by marketing touches.

After analyzing thousands of conversion paths, algorithmic attribution notices that people who are exposed to a specific piece of organic content go down a different conversion path. And it discovers that if they go down that path, they are way more likely to buy from you than other site visitors.

So what if these converting visitors don’t often buy during the initial session? After seeing that blog/video/etc., they’re more susceptible to click on your paid search or Facebook ads and buy when they’re in the right mindset.

DemandJump attribution picks up on this, and in this case, it would illustrate the power that organic content piece.

How Does DemandJump's Algorithmic Attribution Work?

(This is a bit of a simplification, but it illustrates the point.)

DemandJump's algorithmic attribution uses a probabilistic graphical model called the Bayesian network to predict the true cause of a purchase.

You see, after analyzing thousands of digital paths taken by both converting and non-converting visitors, DemandJump attribution (algorithmic attribution) assigns probabilities of converting based on previous paths taken

It does this analysis at a massive scale for each potential next-step, and uses these paths’ probabilities to assign value to specific marketing channels & touch points - based on their likelihood to result in a conversion later. So, even if someone doesn't convert right away, algorithmic attribution understands if exposure to one marketing channel sends consumers down more frequently converting paths as a result.

So when you’re looking at DemandJump attribution, you get a more accurate view of which channels have the greatest potential to drive new business, regardless of whether they are top of funnel or bottom of the funnel activities. With DJ attribution, no one channel gets disproportionate credit for influencing conversions.

But as mentioned earlier, you’ll need to dive into what specific campaign and ad it was that should get this conversion credit.

So in DemandJump’s attribution dashboard, you can drill-down into each channel and find the algorithmic attribution for each campaign.

Want to see what DemandJump’s algorithmic attribution tells about the effectiveness of your marketing efforts? Reach out so we can schedule a call with you.


Get a Demo of Marketing Attribution